I'm thankful now that I once had a chance to meet him, briefly, at a comics convention, and later to trade a few messages on computer boards. I'm glad I told him how much I had enjoyed his work and what it had meant to me.

I once wrote an essay on Howard the Duck for the Comic Effect 'zine. In it, I talked about how when the famously money-losing Howard film was released...I had actually kind of liked it-I was 16 at the time (in my case, the fact it had songs written by Thomas Dolby didn't hurt).

Nowadays, I see a lot more of its many flaws (its many, many flaws), but I will always have a certain amount of warmth in my heart for it. It wasn't great, but it led me to the comic book, and that was wonderful.

As you'll see if you scroll down to the bottom of this site, I've decided to make Howard a permanent part of the ecology around here (I chose the picture I did because it looks like Howard hitting bottom...and bouncing back).

Which is appropriate, because this blog is a reflection of at least part of how I think, and Gerber and his duck are a part of that. Gerber is one of those writers, like Douglas Adams, whose lines (and more, whose ideas) pepper my thoughts and sometimes my speech so often that I don't think I'm always aware of it.

How many other Marvel comic books from the '70s would have had their title character walk away from, rather than engage in a fight with, a costumed would-be nemesis? The Candadian nationalist Beaver, no less...and then suffer a nervous breakdown as a result?

As Heidi MacDonald wrote in her blog

In a country made cynical by a failed war in a rotting jungle and a president who thought nothing of personally authorizing thugs to win an election it was time to question heroes.

He had an influence on my life. Given the state of my life, who knows whether he would've liked that, but...

As you can read by following the link at the top (and the others provided there, all of which are recommended), Gerber was also a key figure in comics for reasons other than creating and writing that character.

His willingness to make a stand against Marvel Comics to try to establish his ownership of Howard started a ball rolling in the industry that changed it into the more creator-centric business it is today. 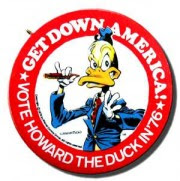 Somewhere, I still have a Vote Howard! pin which I bought at a convention. I'll have to try to find, and wear it next time I'm out.
Ben Varkentine at 10:45 AM